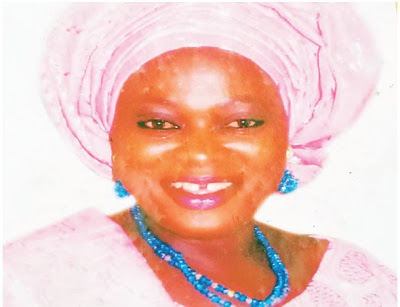 Landlady Slumps After Tenant Pushes Her Over Door Closure

The family of Olayemi Adetola-Odekoya has been thrown into mourning following her death as a result of a misunderstanding between her and one of her tenants, Saheed Lateef, at their place of residence on Apata Street in the Palmgrove area of Shomolu, Lagos State.

Prenkoloaded gathered that Olayemi’s tenants had complained to her about incessant attacks by thieves, who break into the building to dispossess the residents of their valuables.

To curb the attacks, it was learnt that Olayemi called a meeting of the tenants where it was agreed that she would be in charge of locking and opening the building’s main entrance door at night and in the morning.

The times to shut and open the door were also agreed upon at the meeting.

On the day of the incident, Lateef was said to be set to go to work before the agreed time and ran out of patience when efforts to get the landlady to open the door proved abortive.

Olayemi’s daughter, Adejola, said Lateef broke the main entrance door when her mother did not attend to him on time, adding that when the 56-year-old held him by his shirt, he pushed her to the ground.

According to Adejola, the shock of Lateef’s action affected her health, adding that she died while being rushed to hospital.

She said, “Thieves usually break the doors of some tenants to steal their properties and they were complaining to my mum. So, a meeting was held on Sunday, February 3, 2020, with the tenants, where the time to close the door was set. When my mum asked who would be locking the door, all the tenants said they couldn’t and suggested that she should be locking it.

“But she told them that she was not strong to be opening the door before 5.30am, but she would be locking it by 11pm and they all agreed. Around 5am on the day of the incident, Saheed Lateef, aka Daddy Amid, started banging on the door leading to our section of the building and someone opened it and he came directly to our door and started banging on it. My mum felt that he should have knocked on her door instead of banging on it.

“He left and all of a sudden, he started shouting that he was going to break the door. He eventually broke down the door and my mum came out, held his shirt and prevented him from leaving. She said she was going to take him to the Pedro Police Station for breaking down the door. So, he pushed my mum to free himself from her grip and she fell.

“He left with his wife and children and I quickly rushed my mum to hospital, but she died on the way. He didn’t come back home that day, so the police invited his wife to produce him and he showed up in the evening of the following day.”

A source said the landlady died of chest pain, adding that the incident occurred three weeks after she organised the one-year remembrance of her mother.

The source said, “I observed that the landlady’s children were going up and down, but I continued with my work. Around 10.30am, I saw her best friend and her brother in the house and a resident informed me that the woman had died.

“I was surprised because she was not sick. She celebrated her mother’s one-year remembrance three weeks before she died.

“I heard that she and one of her tenants had a fight and in the process, the tenant pushed her to the ground and she complained of chest pain and she died while being rushed to hospital. The police were invited, but the man was nowhere to be found; but the people, who came on condolence visits to the family, said the tenant’s wife had been arrested.”

When contacted, the state Police Public Relations Officer, Bala Elkana, said Lateef had been arrested, adding that Olayemi became unconscious after she was pushed to the ground and was rushed to the Shomolu General Hospital, where she was confirmed dead.

Elkana stated, “On Monday, February 24, 2020, one Adejola Odekoya reported that around 5am, her mother, Olayemi Odekoya, 56, was pushed to the ground by one Saheed Lateef, a tenant.

“Olayemi became unconscious and was rushed to the Shomolu General Hospital, where she was confirmed dead by a doctor. The suspect, who initially took off, has been arrested. An investigation is ongoing.”