A middle aged man, Chidiebere Christopher Nwoke has lost his life after a dangerous snake bit him during bush clearing in Umuahia, the Abia State capital.

ABN TV gathered that this development has put the people of the community in a state of mourning as the young man was said to be full of life and hard working.

Our correspondent gathered that late Nwoke had gone to farm alongside his younger brother when the tragic incident happened.

He said Nwoke unknowingly inflicted a machete cut on a dangerous viper snake known as “AJUALA”.

In an effort to gather the cleared bush with his hands, the snake bit him on his left hand which resulted to the swelling of the hand.

However, he was rushed to an anti poison native doctor who gave him some herbal drugs to stabilize him.

He later passed on and has since been deposited in the mortuary. 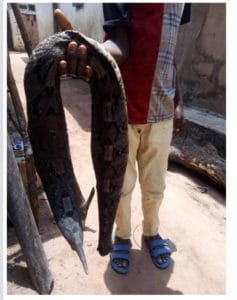