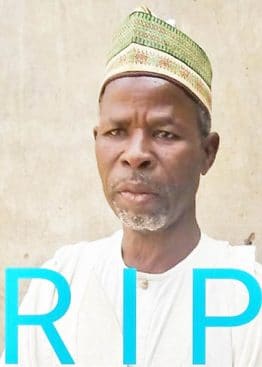 It was a sad day for those who converged for Juma’at prayer last week Friday as 71-year-old Malam Ahmad Abdullahi, popularly known as Asi, died in congregation.

According to some worshippers, it was while on the second raka’at that he couldn’t return from Sujud (prostration). Subsequently, he slumped and died.

There was no premonition about the death of the septuagenarian, variously described as God-fearing, religious, pious, jovial, easy-going, well-respected. He was famous in his locality.

It was said that he looked hale and hearty before his demise.

On the morning of the fateful Friday, a few hours before his death, Malam Ahmad had paid a condolence visit to his relatives at the Filin Magaji area in Gidadawa.

A neighbour also told Daily Trust Saturday that on that day, about 9am; Malam Ahmad went to a nearby shop to buy a blade to shave, in preparation for the Juma’at prayers.

“As he was leaving the shop, he came across a friend who joked with him about reaching the Juma’at mosque before him. He responded, saying, ‘I will be there before you Insha Allah’,” the neighbour said.

The wife of the late Malam Ahmad,  Mallama Halima, who is 58 years old and has been married to him for 34 years, said her late husband was a gentleman. They have three children – Saudatu, the eldest, Zara’u and Abubakar.

“He went to the mosque in the company of our grandchild, and that was my last interaction with him,” Halima recalled.

Narrating how she got the news of her husband’s death, she said, “A few moments after the Juma’at prayer, I heard some noise nearby and people struggling with something heavy. I was asked to go into the inner room and give them some privacy.”

She explained that she refused to go in because she became suspicious.

“I remained standing. People came in with his dead body and started asking me to leave everything to Allah. They said it was the will of Allah that he would die in such manner. I collapsed immediately.”

Asked if she had any premonition about the death of her husband, Halima said she started feeling sick and restless early that morning.

“I woke up feeling feverish and couldn’t do anything. So I reclined in the bed and was wondering what could be wrong with me that day,” she said.

She said her late husband was always in prayers and supplication; and he loved children.

Malama Halima recalled their three decades together: “For the 34 years we spent together, we never quarrelled, even for a day. He meant everything to me.”

A relative and spokesman of the family, Alhaji Garba Bello Abdullahi (Dan Baba), in an interview with Daily Trust Saturday, described the deceased as God-fearing and patient.

He said the late Malam Ahmad was the pillar and mentor of the family, who was prayerful and always among the first to attend the morning prayer(Subhi) in the mosque.”

Recounting his last moment with him, he said, “I saw him at Juma’at prayers, but we didn’t have the opportunity to exchange greetings. I later got a call at work that he had passed on.”

Speaking on possible premonition about Ahmad’s death, he said, “The unusual activities I witnessed some months before he died was the manner in which he stood at a spot for about 30 minutes when coming in or going out of his house. It was something he never did.”

Malam Ahmad’s last born, 22-year-old Abubakar, described the death of his father as a colossal loss.

“We will miss his care, advice and the kind of support he gave us. My father was a disciplinarian, especially on matters concerning our education. He advised us to be good and focus on our studies.

“We take solace in the fact that our father died at a religious place, especially observing a Juma’at prayer and in a position of being closer to Allah,” he said.