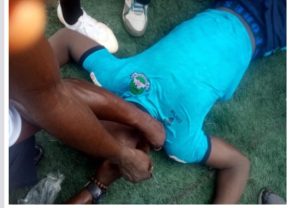 Martins slumped after a collision with a Katsina United player, on Sunday afternoon, and efforts to revive him by the medics and subsequent rush to the hospital were unsuccessful.

Although he was rushed to the hospital, he gave up the ghost on arrival but according to an eye witness, things could have been different if the Peugeot 406 Ambulance stationed for emergency had started on time.

The player was attended to by medics of the two clubs when he slumped and was later rushed to Dalhatu- Araf Specialist Hospital in Lafia where he was pronounced dead.

A video of his teammates crying after the unfortunate incident has since gone viral. 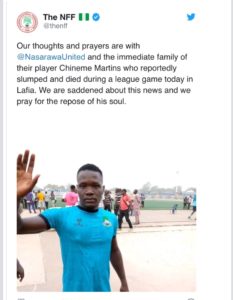 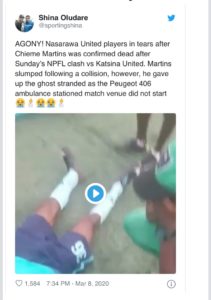 However, NFF, LMC and some NPFL clubs to took to their Twitter handle to react to the death.

Nasarawa United went on to win the game 3-0 but they will be deeply pained by the irreparable loss.