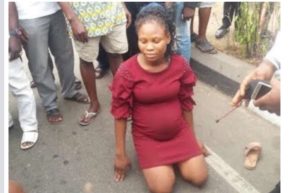 A pregnant young woman in her twenties has reportedly ran mad in Imo state.

According to an eye witness, the pregnant lady was dropped off around 9am by boys suspected to be yahoo boys who are also into rituals.

Sympathisers tried helping her immediately they noticed she was behaving abnormally.

She was also not seen with her underwear. An eyewitness said;

“She was dropped by some strange boys in a vehicle, she started behaving strangely and we suspected she might have been dropped one of these ritualists because she was not having her undies on as she tried to free herself from the sympathisers who held her.” She was later taken to a nearby church for spiritual assistance.