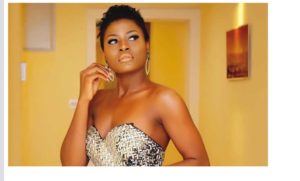 A former Big Brother Naija contestant , Alexandra Asogwa , aka Alex Unusual , has said that unmarried women who have babies deserve respect and not condemnation .

According to her , most of them didn ’ t intentionally put themselves in that position . Alex spoke against the backdrop of a stage play she is acting in as a baby mama . On whether she would consider having a baby out of wedlock , Asogwa told Sunday Scoop , “ I hope to get married and have kids .

However , I don ’ t judge baby mamas because many of them didn ’ t plan for things to be that way . Most of the kids were born out of love . They were , most likely , in love with whichever guy got them pregnant but maybe , things didn ’ t later work out .

I feel we are supposed to give them the respect that they deserve because they have children . ”Speaking on her experience preparing for the stage play , Man Enough , which begins showing today, Alex said ,

“ This is actually my first time of being in a stage play . It has been very taxing because it is way more difficult than being on a movie set . If one is on set, one can have several takes but on stage , one has to get it right and show the right emotion . I have been trying so hard to be mentally prepared for it .

I am handling it well and by God ’ s grace, it will turn out perfectly . ”
Alex also admitted that she was fe

eling nervous about what the reaction of the audience would be. She added, “ I would not deny it ; yes I ’ m feeling nervous . I am worried because I’ m going on stage with people that have been doing this for a long time while it is my first .

I really don ’ t know if I can keep up with their energy but I would put in my best and I ’ m sure that after the first showing , I would be relaxed . ”

On how the project has stretched her , the reality show star said, “ Firstly , it has adjusted my timing in a positive way . I had to be at rehearsals early. Considering Lagos traffic , I had to wake up early and get there on time . It has also affected my diction because I have to make my statements very clear. ”