Tears Flow Bitterly As Dangote Truck Wipes Out Family Of 4 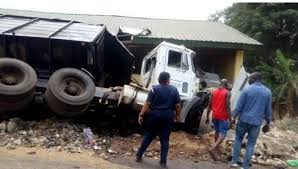 The Nation reports that tragedy struck in ancient city of Kano on Sunday, following a ghastly auto crash that perished a family of four in the city.

The city is now thrown into mourning.

The incident which occurred at Gaida outskirts of the metropolis was allegedly caused by Dangote truck along the ever busy highway that linked Sharada Industrial area with Chalawa zone.

The 40 years old victim who was identified as Muhammad Sagir was said to be riding on a motorbike with his wife, three children when the incident occurred.

DSP Abdullahi Haruna, the Police Public relations officer in Kano while confirming the incident said five victims were evacuated from the site to Murtala Muhammad Hospital,  adding that “the man,  his wife,  two children died, while one escaped unhurt. ”

The police spokesperson revealed that the truck has been moved and detained at the police headquarter at Bompai, adding that investigation is on to track down the fleeing driver.

NEWER POSTEmir of Kano, Sanusi Dethroned
OLDER POSTMy Bum Gets Me The Most Attention – Oluwatosin Shokoya