US Is To Lift Visa Ban In One Month – Geoffrey Onyeama 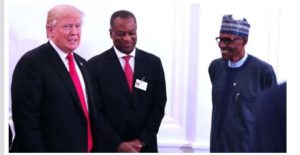 The Minister of Foreign Affairs, Geoffrey Onyeama, has given indications that the United States Government may lift its visa ban on Nigeria in about a month’s time.

Onyeama made the disclosure on the sidelines of the 5th Nigeria-United States Bi-National Commission (BNC) in Washington DC, United States.

Nigeria, Eritrea, Myanmar and Kyrgyzstan, including Sudan and Tanzania, were countries that the United States slammed with visa ban last week on account of performance metrics for identity-management and information-sharing criteria.

The United States was piqued that there was a lack of a credible background investigation system that security groups like Interpol can rely on in vetting and certifying the origin of prospective immigrants to the United States from the affected countries.

Following the ban, President Muhammadu Buhari immediately set up a committee to look into the issues that led to the issuance of the ban on immigrant visas to Nigerians.

In line with the presidential directive, Onyeama said that the Nigerian Government has taken serious steps to address issues raised by the United States in issuing the visa restrictions.

Onyeama stated that after productive deliberations on the visa ban, the United States Government assured Nigeria that it was possible to lift the ban if the Federal Government resolved the issues in one month.

He added that the United States was apprehensive over variations of the Nigerian data system and third party involvement in the management of the passport system, particularly information and data on lost and stolen passports.

“So, we have been doing a lot already to address this. We are putting in place some databases and ICT architecture that will capture these data and make them accessible in real-time to Interpol and all the member-countries of Interpol and it should be up and running within about a month,” Onyeama said.

Speaking further, Onyeama said the Nigerian government is currently providing direct information on the lost and stolen passports within the six technical areas the United States had raised concerns.

While saying that Nigeria has met most of the requirements, Onyeama added that the government is also addressing the outstanding issue of lost and stolen passports.

“So, we pretty much agreed with them that once we address these issues, hopefully in not too distant future, we will be removed from these restrictions,” Onyeama added.

Onyeama also disclosed that the Federal Government has kick-started a process of giving information and data directly to Interpol for member-states like the United States to have access.

He also said the Nigerian Immigration Service had already put in place the architecture and technology to address the outstanding issue within a month.