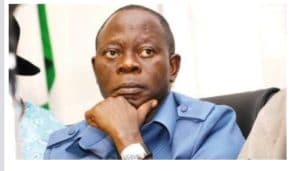 The web of crisis surrounding the embattled National Chairman of the All Progressives Congress (APC), Comrade Adams Oshiomhole, yesterday got more entangled as the Inspector General of Police, Mohammed Adamu, warned the former labour leader against showing up at the party’s national secretariat or moving near any formal function of the party in an official capacity.

The IGP had given Oshiomhole the stern warning in obeisance to an order of an Abuja High Court, which gave an interlocutory order restraining Oshiomhole from parading himself as the National Chairman of the party.

Though the restricted National Chairman had obtained another order from a Federal High Court in Kano State, which restored him as the APC National Chairman, the party insisted on obeying the first court verdict, since the courts are of coordinate jurisdiction.

The two courts orders had been a source of confusion as it had divided the National Working Committee and other chieftains of the party. The IGP met with the different factions of the NWC at the Force Headquarters, where he handed down the warning.

But as the meeting with the IGP was going on, security was beefed up at the National Secretariat of the APC on Blantyre Street in Wuse 2. Saturday Telegraph noticed men of the Nigerian Police Force and Department of State Services (DSS) patrolling the area under the directive of the FCT Director of DSS, who was seen with about five men of the Service on motorbike.

Speaking with Saturday Telegraph, a member of the National Working Committee (NWC), who preferred anonymity, said the chairman’s fate had “been sealed as he was asked by the IGP not to appear at the party secretariat in official capacity”.

The NWC member also explained that the Acting National Secretariat, Hon. Victor Giadom, has been asked to oversee the party until the leadership announces an acting National Chairman.

“We have just finished the meeting now and the IGP asked Oshiomhole not to come near the party again. Giadom would be overseeing the party pending when the leaders will announce an acting chairman. And it won’t be long that the party would announce an Acting National Chairman.”

However, some personal staff of Oshiomohle were prevented from gaining access into the party secretariat. The staff, who came with two Toyota Jeep cars were asked to go back from the entrance gate of the party.

From 7am when staff reported for work till 8pm when they left, the APC National Secretariat that is located on Blantyre Street was kept locked. Only few security men where seen going on and out of the secretariat. Even after the Oshiomhole staff identify themselves, they were still denied access to gain entrance into the secretariat. They were later asked to move away from the gate of the secretariats.