Drama As Policemen Seize A Power Bike In Lagos 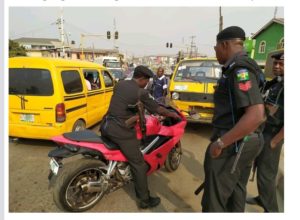 Some policemen on Thursday were reportedly disgraced after they tried to seize a power bike belonging to a Lagosian while on his way to work.

According to the facebook user who also happened to be the man in question; Nmutaka Chikwendu stated that he was accosted by the officers of the Nigerian Police after they sighted him on his power bike while on motion , and before they could take any action, passers-by had already surrounded the officers, asking if the bike was a commercial motorcycle popularly referred to as ‘Okada.’

The Policemen however, turned a deaf ear to the lamentations of the passersby and blatantly refused to release the power bike to the owner but things turned around when one of the passersby put a call through to the Police Command and it was finally released.

The Facebook user Nmutaka Chikwendu had to narrate his ordeal:
So…..I was heading to work this morning dodging massive potholes and meandering through heavy traffic. The Nigerian Police decided to arrest me because “bikes are banned”. The 2 things that stood out for me the most were: 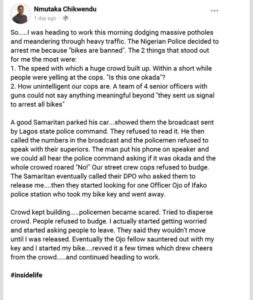